The Beijing Winter Olympics have finished. Hallelujah! Have you stuck to the screens of TVs and laptops? Did you follow the events closely? Were they sick of ours? Until recently, these questions would have seemed strange. But now they are in place. After all, although I'm afraid to make a mistake, of course, the miracle of the Olympics was not really felt. Well, passed and passed – then what? 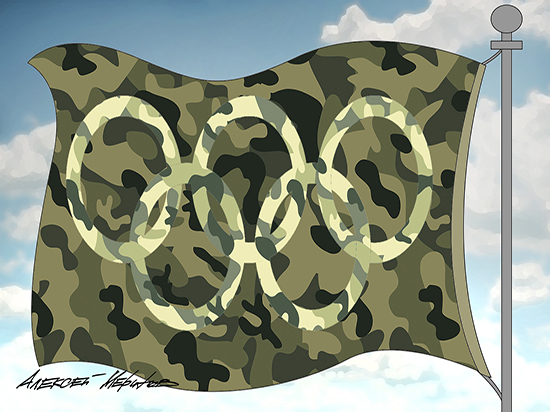 This was largely due to the attitude of the notorious international community towards Russia, when our athletes (and they still remain ours) were forbidden to perform without an anthem and a flag. But this is unlikely, for example, to explain the fact that, according to a poll by VTsIOM, 97% of Russians did not know a single name of an Olympian who went to the Summer Games in Tokyo. With Beijing, it turned out a little better, but still. The fall of interest in the Olympic Games is recorded around the world.

Why so? Yes, people have got a lot of entertainment, but the main reason is that the International Olympic Committee pretty much spoiled itself. And scandal after scandal happens. So it was in Tokyo, where the Olympics were held, like “gloomy starts” in a closed KGB bunker. The failure is the only one that was not explained! They even came up with a version, as if after reading Stephen King, that the ancient damned burial places were to blame. Hmm, they didn't know what would happen in China yet…

The Beijing Olympics are probably the most brutal, if not ruthless, in history. And it was not His Majesty Sport who ruled in the Chinese capital, but COVID-19. Those who were in Beijing used one word to describe what was happening – paranoia. Isn't it insanity when the Canadian and Russian women's hockey teams played in medical masks?

Why not cancel this covid? After all, what, for example, the Olympic Games without a cool hockey tournament? And let me remind you that the National Hockey League, where the best hockey players play, refused to let them go. The Tokyo Olympics have been postponed. And this made it the most expensive in history – $ 15.9 billion. The most expensive and the most senseless.

The World Wars canceled the Olympics. And how many scandals! We remember Moscow, the year 1980, and Mishka flying into the sky. But the Americans, in principle, did not fly to us; The Cold War changed things. Politics has always dominated sports in general and the Olympic Games in particular.

Almost more often than others, by the way, the Germans were distinguished by Olympic troubles. We remember the Games in 1936 in Berlin. Germany won the right to host the Olympics in 1931, but then Hitler came to power. They wanted to transfer the games to Barcelona, ​​but they did not. Spain, Lithuania and the Soviet Union refused to go to Hitler's lair, and the world received the Nazi Olympics, immortalized in the film by Leni Riefenstahl.

The Germans wanted to be rehabilitated in 1972. But on September 5, members of the terrorist Palestinian organization Black September took Israeli athletes hostage. The police and special forces of Germany during the special operation allowed the destruction of 11 hostages. Hell. But at the same time, our basketball team won the best final in history. Remember, yes, Alexander Belov and the legendary 3 seconds?

Undoubtedly, the Olympic history of the Soviet and Russian teams lacked the right bright colors. But now everything is gray for us. We are still being terrorized by doping.

There was a loud scandal with Kamila Valieva. Scandal is vile and orchestrated. Anyone who has anything to do with figure skating knows that the substance found in Camila does not affect the results in this sport. They decided to break the girl psychologically – and they broke it (4th place instead of the obvious 1st), despite all her genius. It was a double whammy. On the one hand, they showed the world Russian monsters who do not disdain anything – they even “dope children”, and on the other hand, they sent a signal to these very children that contacting Russia, fighting on its side, is not only not comme il faut, but also dangerous , more expensive for yourself.

That, by the way, is more important than the victory of Russian athletes in Tokyo and Beijing. The way they were tested, no one was tested. These are victories not just of Russian athletes, but of fair sport in principle. “You yourself should not distinguish defeat from victory,” as Pasternak wrote, and yes, it’s important, in fact, as a nation, the country experiences not victories, but difficulties and trials. Although, of course, we did not have enough psychological stability – after all, we are already ninth in the “gold standings”, but in the total number of medals scored, we are second. That is, somewhere they almost made it, didn’t run, didn’t make it.

And yet we note with sadness that the Olympic Games have finally turned from competitions conceived as a war by other means into a new war layered on geopolitical and military conflicts. Politics began to determine not just a lot, but almost everything.

The Olympic Games have mutated from a battle of physical abilities, will, and fortitude into a duel of bureaucratic cunning, sometimes even meanness, and, first of all, into a battle between pharmaceutical corporations. It was not athletes who began to compete, but chemicals and the ability to hide the traces of their use. Add to this the stories of transgender athletes, tolerance – and we get an illustration of the textbook phrase “everything is mixed up in the house of the Olympic, sorry, Oblonsky.”

Of course, this does not negate the fact that any Olympics has its heroes. Including the Winter Games in Beijing. Is it possible not to admire the Mexican figure skater Donovan Carrillo (he trained at the mall and raised money for equipment through crowdfunding)? Or our Alexander Bolshunov, who brilliantly won after monstrous trials? Figure skaters Anna Shcherbakova and long-suffering Kamila Valieva? And how do you like the chic hockey goalie Ivan Fedotov? Yes, the Olympics have their heroes, but this is not a team, but a personal story. Another sign of an individualistic time, when every man is for himself.

In ancient Greece, when the Olympic Games began, wars stopped. Now, during the Olympics, there is only talk about a big war. The Olympic Games no longer unite, but, on the contrary, divide an already fragmented world, which, yes, on the one hand, is globalistic, but on the other, is divided into hundreds and thousands of different groups and groups, and a person is closed exclusively on his beloved. The Olympics is no longer capable of gluing together this sprawling, disunited world. Well, what, in principle, is capable of?