As a result, the agreements with the republics of Donbass were supported with a score of 400:0

The State Duma unanimously ratified the agreements on friendship, cooperation and mutual assistance, which were signed by Vladimir Putin and the leaders of the DPR and LPR late last night . The deputies did not ask questions, they called the day “historic”, the President of the Russian Federation was thanked for the timely decision, and the President of Ukraine was called different names. On the same day, the Federation Council unanimously ratified the treaties. 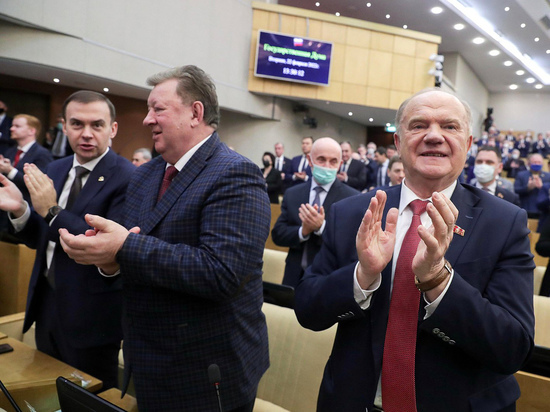 The bills on ratification of the treaties were submitted to the State Duma at about 1 am on February 22. In the morning, at a joint meeting, the committees on international affairs and on the affairs of the CIS, Eurasian integration and relations with compatriots promptly considered them, and the Duma Council included them in the agenda of the plenary session.

The presidential spokesman, Deputy Foreign Minister Andrey Rudenko was the first to call February 22 “a historic day” from the Duma rostrum – then this was repeated by all the speakers without exception. Ukraine sabotaged the negotiations and “actually withdrew from the Minsk agreements”, in recent days “we found ourselves on the verge of large-scale military operations”, in order to prevent them, the president on February 21 decided to recognize the independence of the DPR and LPR, and then signed agreements with these state entities about friendship and mutual assistance, the diplomat reported. Such contracts are a traditional practice, he noted. Russia also had such an agreement with Ukraine, but in 2017 it was terminated by the Ukrainian side and ceased to be valid in 2019…

Those signed with the DPR and LPR are like twin brothers, 31 articles each. The parties recognize the sovereignty and territorial integrity of each other, agree to provide each other with military assistance, jointly protect the borders of the DNR and LNR. It is allowed to build military bases on each other's territory. Dual citizenship is allowed. The monetary unit is the ruble.

The head of the Committee on International Affairs, Leonid Slutsky (LDPR), said that “some tension on international platforms” after the ratification of the treaties could happen, “there could be sanctions and other difficult situations for us,” but “we are ready.” The Minsk agreements were not destroyed by Russia, which is not even “a party to the agreements, only a guarantor, and in principle cannot fulfill them,” the deputy believes.

“One can argue a lot about what today’s decisions will lead to, but we have done it not the last step, today only immediate tasks are being solved, ”the head of the Committee on CIS Affairs Leonid Kalashnikov (KPRF) said pointedly, recalling that some other steps“ were also implied by President Putin in his speech. “Because there can be no hostile state on our borders!” — said the deputy.

No questions were asked to the speaker and co-rapporteurs. “All issues were discussed scrupulously” when that same appeal to the president was adopted on February 15, speaker Vyacheslav Volodin explained. Therefore, we immediately switched to speeches from the factions.

Here the speaker noted that if it were not for the courageous and responsible position of the President of the Russian Federation, the decision to recognize the DPR and LPR would not have taken place. Passing the floor to the representative of the Liberal Democratic Party, Mr. Volodin said: “It’s a pity that Vladimir Volfovich is not there, I talked to him yesterday – he is much better, he really wanted to speak in the Duma, but the doctors are not letting him go yet” …

Andrei Lugovoi began his speech by showing his colleagues a video recording of the speech of the LDPR leader at the plenary session on December 23, 2021. “This will not be a peaceful year, everyone should shut up and respect our country!” – prophetically, as it now turns out, Mr. Zhirinovsky then shouted from the rostrum. Mr. Lugovoi was not ready to renounce the “anti-Sovietism”, repeating after President Putin that the Communists, who had given Ukraine Novorossia and Crimea, are to blame for everything, and expressed the hope that “February 22 will be the day the beginning of the return of Ukraine to the historical bosom” (bosom Mother Russia, you have to understand). Mr. Lugovoi compared President of Ukraine Volodymyr Zelensky to “a little child who plays with matches and does not understand the danger of the situation” and to “a monkey with a toy grenade.”

Earlier, when our authorities were still hoping for diplomacy, Russian deputies, following the Foreign Ministry, tried not to offend the leader of a neighboring state from the rostrum. But now the leader of the “SR” faction, Sergei Mironov, was not shy either: Mr. Zelensky, in his opinion, is a “coward” because he is afraid of the Nazis, a “liar” because he promised to return peace to eastern Ukraine when he was elected, but nothing did, and “scoundrel” because he “organized the genocide.” Speaking about the need to support the people of the DPR and LPR, the Right Russian rightly noted that it is still necessary to “ensure a decent life for the citizens of the Russian Federation”, because “a patriot of Russia cannot be poor.” But he did not specify how to combine one with the other.

Speaking on behalf of the New People, Vice Speaker Vladislav Davankov also noted that now “the actions of the government in the fight against poverty are especially important,” because “sanctions will intensify, the dollar will rise, it will be more difficult.” And the leader of the United Russia faction, Volodymyr Vasiliev, recalled that “the decision was not easy,” but it “changes the configuration in the international arena and will make our Western partners and, most importantly, the Ukrainian military, think.”

“The discussion shows that there was a consensus on this issue in the country,” Mr. Rudenko summed up.

And literally an hour later, and also unanimously, the Federation Council ratified the treaties (“this is our moral duty,” said the speaker of the Federation Council Valentina Matvienko), and they went for signature to the president. Laws on ratification will come into force immediately from the moment of publication.