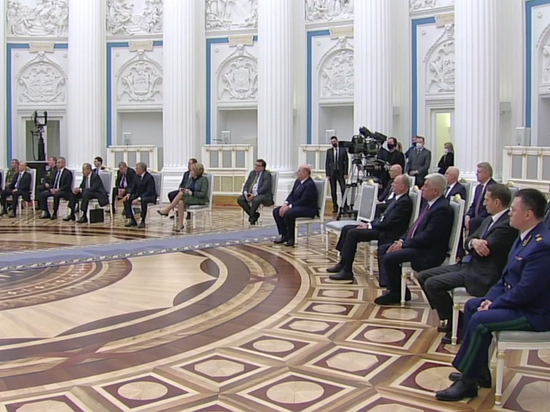 In his speech at the meeting of the Security Council, Putin noted that Russia initially did everything to resolve all contradictions peacefully, nevertheless, the Kiev authorities twice carried out military punitive operations in these territories and, it seems, began a third.

In addition, the president stressed that it is already clear to everyone that the Ukrainian authorities are not going to do anything under the Minsk agreements. In this regard, Putin called the issue of recognizing the DPR and LPR closely related to global security issues in the world and in Europe in particular.

Putin also warned that if Ukraine is admitted to NATO, the threats to the Russian Federation will increase many times over.

Speaking at the meeting, Russian Foreign Minister Sergei Lavrov stressed that the West is not ready to accept Russia's proposals on non-expansion of NATO. And Deputy Head of the Presidential Administration of Russia Dmitry Kozak stressed that the process of negotiations on Donbass is at zero, and neither Ukraine nor the West needs Donbass.

FSB Director Alexander Bortnikov recalled that the situation in the DPR and LPR is degrading , 68.5 thousand refugees have already entered Russia, there are cases of shells of the Armed Forces of Ukraine hitting the territory of the Russian Federation, primarily in the Rostov region. Bortnikov also announced the capture of a Ukrainian soldier who participated in breaking through the border of the Russian Federation.

Defense Minister Sergei Shoigu drew attention to the fact that there is virtually no water in Donetsk, and there is no gas in 2/3 of Lugansk. At the same time, according to him, Ukraine does not conduct spontaneous fire, but understands where it hits. According to him, 59.3 thousand military personnel are concentrated by Ukraine near the borders of the Luhansk and Donetsk regions, heavy equipment is being concentrated. He also called Ukraine's plans to return the status of a nuclear country dangerous.

As a result, Dmitry Medvedev, Vyacheslav Volodin, Valentina Matvienko, Nikolai Patrushev, Mikhail Mishustin, Sergei Naryshkin, Sergei Lavrov, Sergei Shoigu, Alexander Bortnikov, Viktor Zolotov supported a proposal to recognize the independence of the DNR and LNR. And Interior Minister Vladimir Kolokoltsev made an amendment that the republics should be recognized within their historical borders.

Vladimir Putin thanked the meeting participants for their opinion. He said that it was heard and stressed that a decision would be made today in the near future.

Watch the video on the topic < /p>