Vladimir Putin revealed to journalists the “terrible secret” of the negotiations that have been conducted with representatives of the United States and European powers in recent months, telling what Moscow is really seeking from the West and Ukraine. First, it is the recognition of Crimea as Russian. Secondly, the refusal of the Kiev authorities to join NATO. The third condition – the implementation of the Minsk agreements – has already lost its relevance. And the fourth, according to Putin, is the most important: it is the demilitarization of today's Ukraine. If these demands of Moscow are met, the situation will be considered settled in the long-term historical perspective. 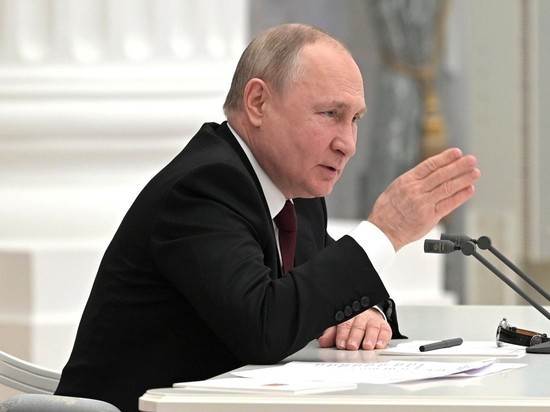 The meeting with Azerbaijani President Ilham Aliyev lasted an unexpectedly long time – 5 hours instead of the two scheduled. However, after such lengthy negotiations, Vladimir Putin did not refuse to answer journalists' questions on the subject of Donbass. (The Azerbaijani guest did not want to stay and listen to the answers: obviously, he had already found out all the points of interest from the president during lunch and hurried to leave the Kremlin so as not to “shine” against the backdrop of someone else’s conflict)

The first question is naturally about the recognition of the DNR and LNR. Within what limits? And what will happen to the Minsk agreements now? Vladimir Putin actually repeated the words of his press secretary Dmitry Peskov: the Minsk agreements no longer exist. As for the borders, the republics were recognized with all the fundamental documents they had. “And their constitutions spelled out the borders within the Donetsk and Luhansk regions at the time when they were part of Ukraine,” the president said. (Recall that this is plus 70% of the territories actually occupied) In his opinion, more precise boundaries should be determined during the negotiations between the leadership of the DPR and LPR with Ukraine. Putin acknowledged that such negotiations are not possible at the moment, as hostilities continue and escalate. “But I hope it stays that way in the future.”

The President did not give a clear answer whether Russian troops would be brought into the Donbass and whether they would take part in the recapture of the “historical” territories of the DPR and LPR, if their leaders had such desires. Putin said that the consent of the Federation Council to the use of Russian armed forces in the Donbas was necessary, since there is a conflict there, and Russia, having signed the agreements, promised to provide these republics, including military assistance. “With this decision, we clearly make it clear that, if necessary, we intend to fulfill our obligations,” Putin stressed. At the same time, he noted that obtaining the consent of the Federation Council does not mean “that the troops will go there right now.” And it is completely impossible to predict the specific actions of the Russian military in the Donbas now: everything will depend on the situation “on the ground.”

Answering a question about how he sees the prospects for “rehabilitation” of relations between Moscow and Kiev after everything that has happened over the past 8 years and continues to happen, Vladimir Putin said that he was ready to reveal a “terrible secret” to journalists. And list the main demands that the Kremlin put forward during many hours of negotiations with European partners and with the Americans, who also wanted to know: what needs to happen for the situation in Ukraine to be considered settled in the long-term historical perspective? It turned out that the list consists of four items, one of which – the implementation of the Minsk agreements – is no longer relevant. The list also includes the recognition of “the will of the people in Sevastopol and Crimea”, that is, the Russian ownership of Crimea. “How is this declaration of will worse than what happened in Kosovo? Yes, nothing! “The President exclaimed in his hearts. Another condition is the refusal to admit Ukraine to NATO. According to the president, in order for Western countries to be able to save face, the Kiev authorities themselves must refuse to join the alliance and, in fact, implement the idea of ​​neutrality. And finally, the most important point is the demilitarization of today's Ukraine. “This is the only objectively controllable factor that can be observed and reacted to,” Putin stressed. If these requirements were met, then Russia and Ukraine, and with them the whole of Europe, could live in peace, without any conflicts, especially armed ones, the GDP made it clear.

It is noteworthy that, according to President, Russia in the current situation is on the side of good: good, Putin believes, should not be powerless. It presupposes the ability to defend oneself, and it is this postulate that the Kremlin intends to be guided by in its relations with the world.