Dancehall’s current king and queen, Vybz Kartel and Spice, show each other love on IG amid a viral video alleging she had an embarrassing wardrobe malfunction on stage.

The official Instagram page’s display photo for the currently incarcerated Vybz Kartel was today updated with a photo of his long-time friend and collaborator Spice. She returned in kind and updated her page’s profile picture with that of the “Fever” deejay. The “Queen of the Dancehall” has always credited Kartel with her early success in the music industry, having produced one of her biggest hits to date, “Romping Shop.” She has also noted that he was instrumental in the formative years of her career.

This display of adoration and support could be seen as both artistes reminding fans of the love and respect they have for each other. This is also fitting, and one fan noted it is as if the King and Queen are crowning each other since both profiles declare each as King of the Dancehall and Queen of the Dancehall, respectively. 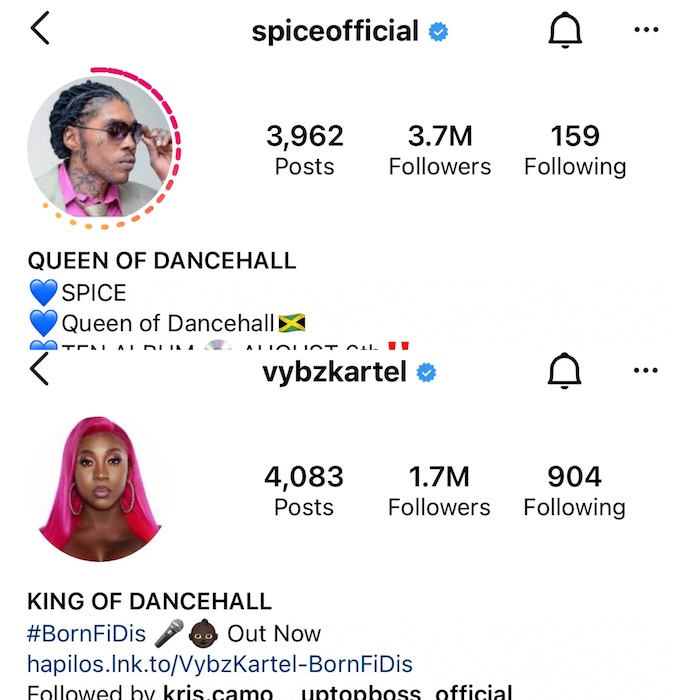 Spice proudly shared a screenshot of Kartel’s page, with a caption recognizing him as her King and acknowledging that he has always loved and supported her.

“See who mi frightened fah yah ?? @vybzkartel MY KING…. THE GOAT……..#BornFiDis he’s always trying to lift me My pu%#y no look so, but carry on @vybzkartel I love every single vein in your body #FreeWorldBoss it’s his profile picture for me,” she wrote in the caption.

In the caption, she mentions two of the controversies she has been facing this week: the possible legal saga with the promoters for Chug It. The second is a video of an alleged wardrobe malfunction making its rounds on social media. The Love and Hip Hop Atlanta star is saying that the viral video was doctored by someone trying to tarnish her career.

The “Send it Up” singer had previously addressed the “Chug It” issue during an Instagram live two days ago, but she was yet to address the video of her performance of “Suh Mi Like It,” where she completed her signature split and appeared to have a wardrobe malfunction and flashed the crowd with her private area.

In this latest caption, though, Spice was sure to clear up what everyone thought they saw and stated firmly, “My pu%#y no look so, but carry on.”

She has also made it equally clear that the opinions shared along with the video don’t matter to her, and the only person’s opinion she cares for is the Worl’Boss.